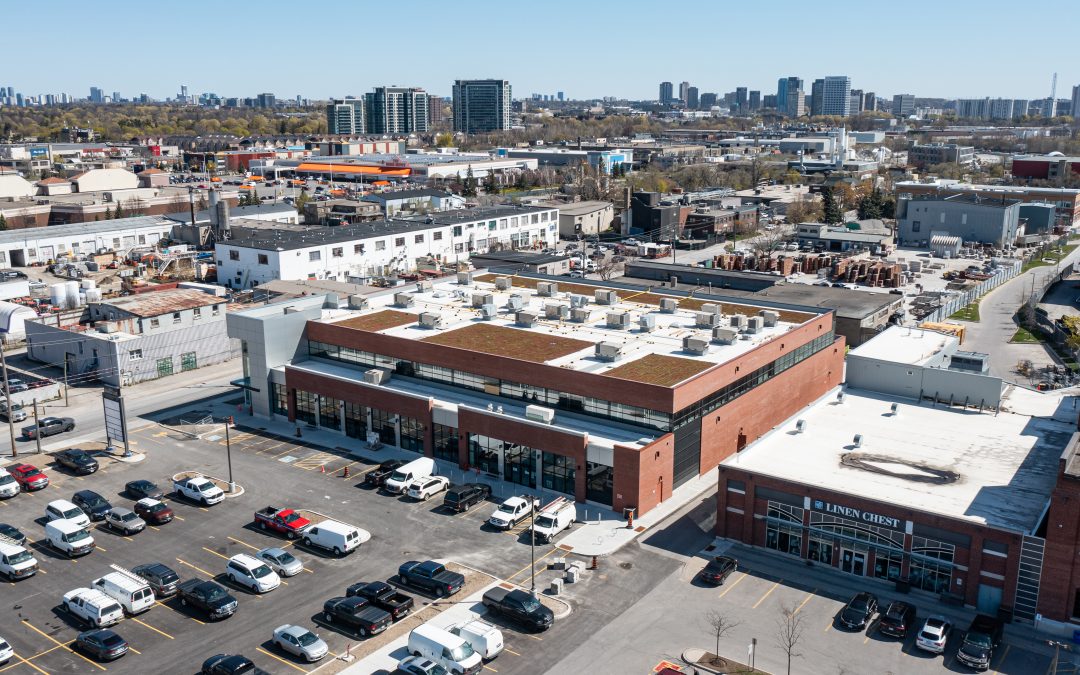 With the ongoing climate change and the rise in air pollutants and greenhouse gas emissions within urban cities, it is important for industries to take the next step to help reduce these pollutants. One sustainable solution on the rise is the implementation of green roofs on buildings.

What is a Green Roof?

A green roof is a layer of vegetation planted over a waterproofing system that is installed on top of a flat or slightly sloped roof. Some green roofs can be incorporated into the design of the building or can be added to the roof of an existing building. There are three different types of green roofs (extensive, intensive and semi-intensive), we will discuss this in further detail later. All green roofs include important features, like waterproofing and root repellent, that allow the structure to be safe and undamaged. 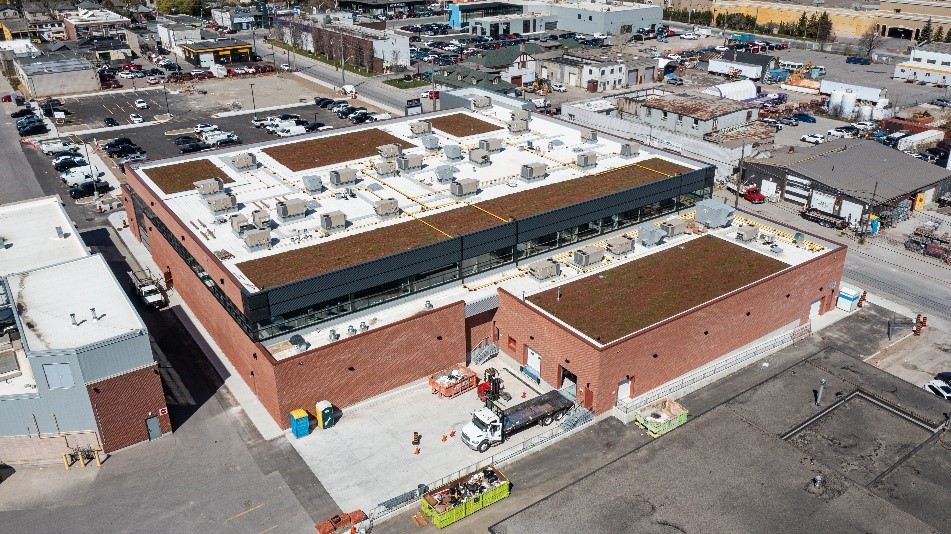 The Benefits of a Green Roof

There are many benefits of implementing green roofs in urban cities, but today we will be discussing the top 5 benefits.

1. The Reduction of Stormwater Runoff

Depending on your geographic location, the summer months entail periods of heavy rain or continuous rainfall. When this occurs the stormwater runoff can greatly impact infrastructure and has the potential to damage waterways and fish habitat. The implementation of a green roof aids in retaining the rain water, and with the plants, returns a portion of the water into the atmosphere through evapotranspiration (evaporation and transpiration). 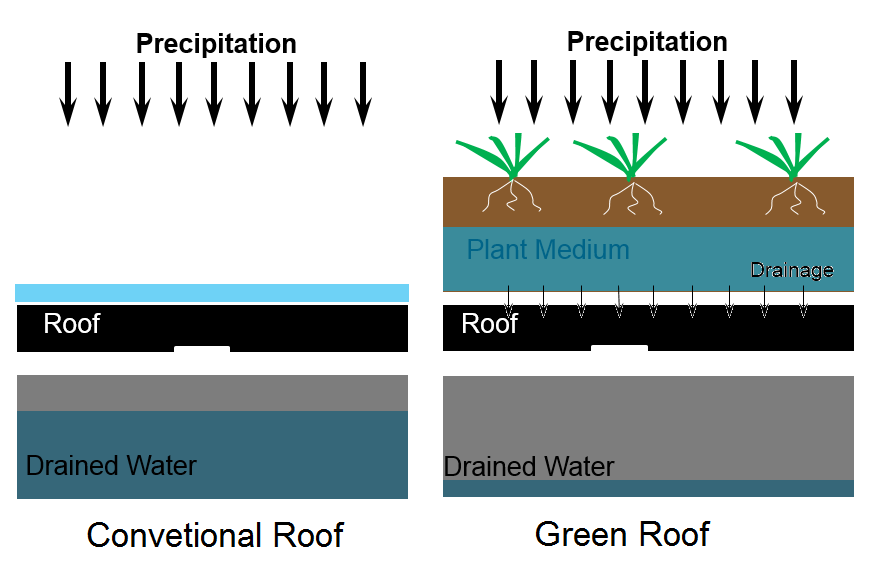 Any stormwater leaving the roof is reduced in volume and eases the stress on stormwater infrastructure and sewers. The stormwater runoff from the green roof is much cleaner than the conventional roofing systems.

Urban heat island occurs when cities replace natural land cover with dense concentrations of pavement, buildings and other surfaces that absorb heat. Heat absorption happens when a city experiences much warmer temperatures than nearby rural areas. The difference in temperatures between urban and less developed urban areas has to do with how well surfaces in each environment absorb and hold heat. These surfaces absorb heat during the day and radiates it at night. This effect increases energy costs (such as air conditioning), air pollution levels and heat related illness and mortality. Green roofs help reduce the Urban Island Effect by cooling infrastructure and the surrounding air by evapotranspiration. 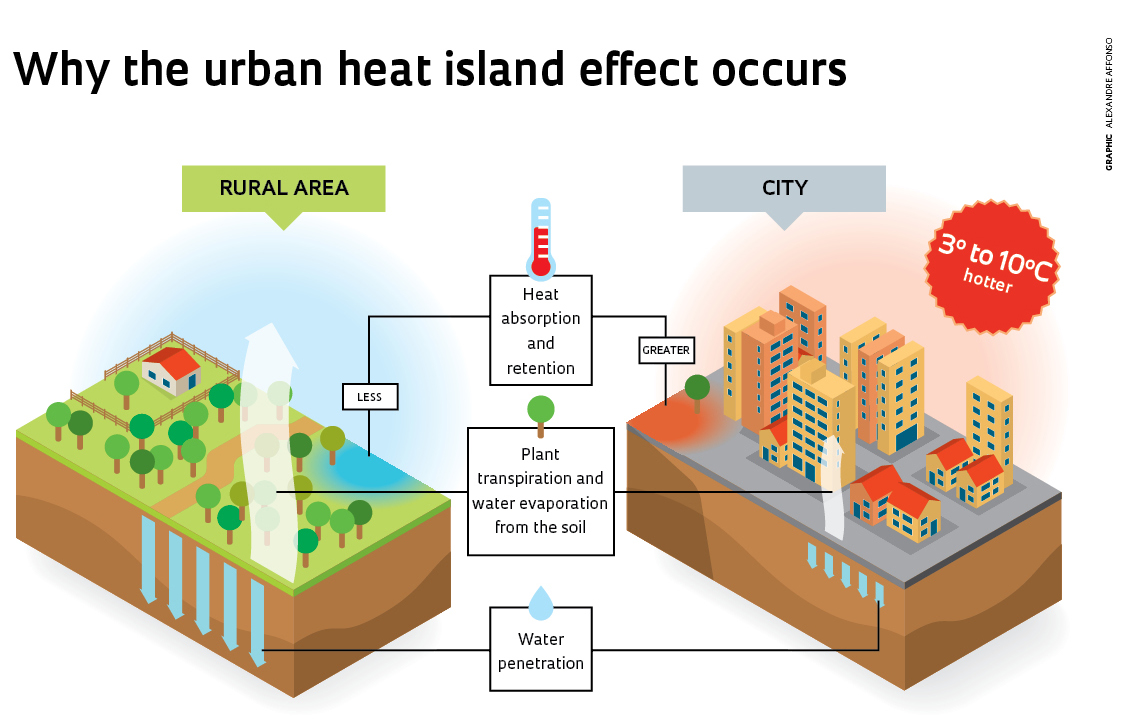 Since green roofs absorb heat instead of attracting it, the system aids in reducing energy costs. A study conducted by the National Research Council of Canada found a six-inch extensive green roof can reduce summer energy demands by more than 75% (Liu et al., 2003)1. Green roofs are beneficial for reducing energy costs during both summer and winter months due to the added layer of insulation. In the summer, the roof protects buildings from direct solar heat. Where in the winter the green roof helps to minimize heat loss through added insulation in the roof. The reduction of energy also means less greenhouse gases are emitted into the air.

Traffic and other industries found within urban cities release air pollutants that have a negative impact on one’s health. The effects on a person’s health can be minimal (allergy-like symptoms) or more serious, such as heart and lung disease.

Plants found on green roofs remove air particulates by trapping them in their leaves. In addition to the removal of air pollutants, the plans produce oxygen and provides shade. This helps alleviates smog, reduce the urban island profile and lessens the need for health care services, resulting in societal cost savings.

As rooftops are undisturbed areas, they serve and provide new opportunities for wildlife to feed and shelter, and serves as a refuge for creatures struggling to survive. Many insects including ants, spiders, flies, and beetles have been found on green roofs. The roofs are optimal for ground-nesting birds who use the green roofs for nesting and raising their young. 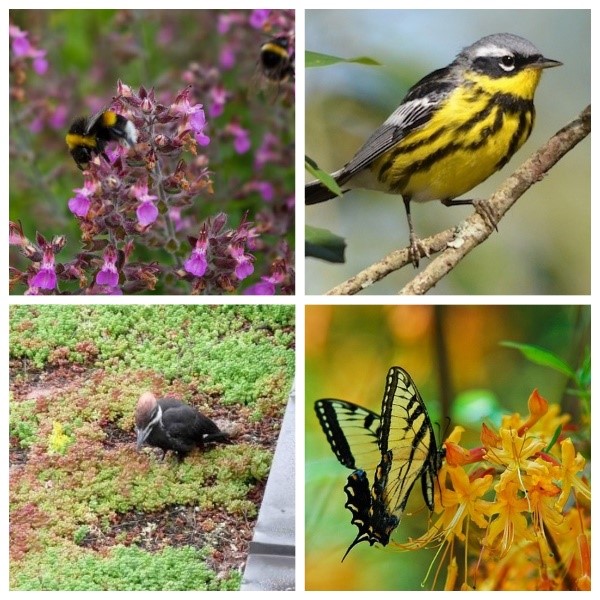 This system is also very beneficial for urban beekeeping and endangered species, especially if the intensive green roofs flower in the summer and during dry periods.

Though there are three different types of green roofs, each one still has major environmental and sustainable benefits.

These roofs are designed for environmental solutions and are made up of a thin layer of soil or other planting medium with shallow-root plants (sedum, mosses and grasses). These roofs are low maintenance and are ideal for large flat-roof buildings and apartments, but are also suitable for low-sloped residential roofs and retrofits. Though the plants are low maintenance, during the first year of being planted they will need to be watered regular, but after a year watering is no longer required. Overall extensive green roof systems are the cheapest to install and maintain. 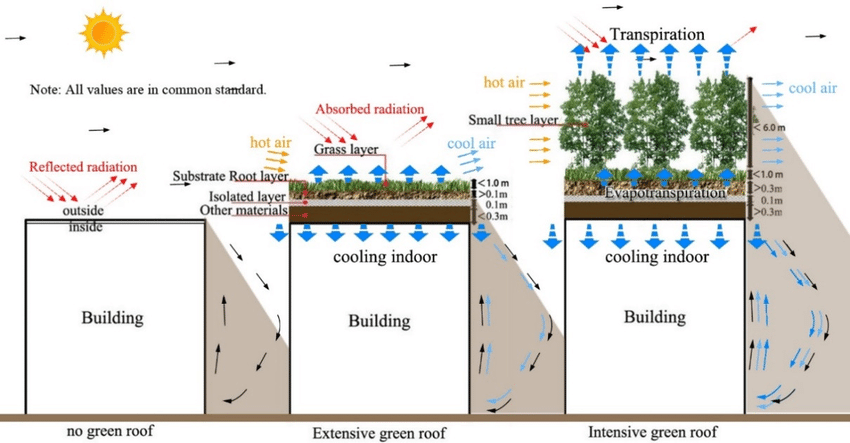 Intensive green roofs require the deepest soil (8-12 inches) and have the greatest impact on structural design, but they accommodate all types of plants big or small. Ensure you avoid plants with invasive root systems. This system allows for the creation of a park-like setting, thus are the best option for roof gardens that will be utilized. Features of these roofs include walkways, railings, lighting, parks, playgrounds and even vegetable gardens are possible.

Due to the size and accommodation of intensive green roofs, a vast amount of attention must be focused on the different waterproofing and root barrier details. As these roofs are often utilized, regular maintenance is required for walkways and other occupancy zone to ensure safety of the visitors.

This green roof system incorporates elements of both extensive and intensive systems. Semi-intensive green roofs are used to harness both environmental benefits and a diverse garden within a cost-efficient budget. Although this system is constructed in layers, it can be installed using a tray system. This system may require more maintenance due to the types of plants and greenery used, however it typically does not involve more maintenance than sidewalk planters. Plants used in these systems include mosses, grasses, sedum, herbs, flowering plants, taller grasses and small shrubs.